South Africa’s “new political dawn” has had a positive impact on consumers’ feeling less financially vulnerable in the first quarter of 2018 (Q1 2018).

This new political dawn refers to President Cyril Ramaphosa being inaugurated as South African president during mid-February 2018. The expectation of millions of South Africans is that the “new political dawn” will translate into a “new economic dawn”, characterised by higher investor and business confidence, which would give rise to higher economic and employment growth rates and therefore lower levels of consumer financial vulnerability.

When analysing the four subcomponents of the CFVI (income, expenditure, saving and debt servicing), the income index improved the most - from 48.9 points in Q4 2017 to 54.8 in Q1 2018. Consumers indicated that their income vulnerability reduced due to them expecting to be more able to retain or obtain employment during Q1 2018, that their income earning prospects improved and that they were more able to acquire money from family or friends.

Table 1 provides an overview of the changes in the quarterly scores of the Consumer Financial Vulnerability Index (CFVI) and its sub-components during Q1 2018 and the two preceding quarters. The measurement scale shows that overall consumers continued to perceive their finances to be mildly exposed.

Consumer financial vulnerability (at the micro-level) is influenced by macro- and micro-economic variables. Such variables include:


Table 1: Quarterly Overview of CFVI and its sub-components 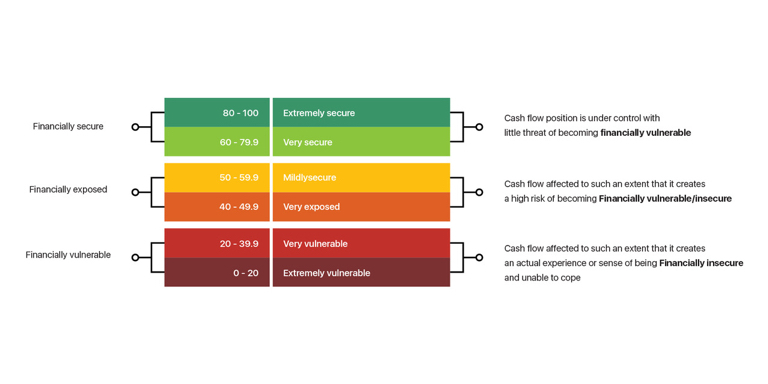 The term ‘Consumer Financial Vulnerability’ implies that consumers experience a sense of financial insecurity or an inability to cope financially. In essence, the CFVI identifies the specific financial sub-component(s) that consumers on average feel are causing stress to their cash flow positions. Therefore, it provides a window into the psyche of consumers and how vulnerable they are feeling with regards to their income, expenditure, savings, and debt servicing capabilities. Insights into consumers’ financial positions are vital to determine the extent to which economic growth and government programmes translate into improved financial stability of consumers. As a quarterly indicator, the CFVI fills an important information gap in South African data on consumer finances as viewed by consumers in the sense that it regularly provides updates as to the state of consumers’ financial vulnerability. The results of this release of the CFVI stem from research conducted by Unisa on behalf of Momentum. The results of this release of the CFVI are based on a selection of 112 key informants from relevant industries (including credit industry institutions, retailers providing credit and municipalities) that are able to gauge consumers’ financial perceptions.


For media queries please send an email to: